Members of Coventry City Council’s Housing and Communities Cabinet are this Friday (November 27) asked to consider two petitions with more than 7,000 combined signatures calling for an Immediate Review of the Local Plan and a return of land earmarked for development to green belt.

Just a day earlier, on Thursday November 26, city planners are recommended to approve controversial plans for up to 2,400 homes on former green belt land at Eastern Green.

Keep Our Green Belt Green campaigners in Coventry and Warwickshire say there is no need to build on the city’s green belt as population growth predicted by the Office of National Statistics (ONS) is “hugely overstated”, plenty of brownfield land sites are still available with planning permission and building additional homes will further exacerbate “horrific traffic issues”, particularly on the A45 at Eastern Green, the A45 Kenilworth junction and Styvechale interchange.

Chair Merle Gerling, whose Local Plan petition has been backed by 5,000 people, said: “I think it is a disgrace that the council is delaying a review of the local plan.  They should begin one now, and put all major planning decisions on former green belt onto hold in the meantime.

“There is plenty of brownfield land in the city with planning permission. As of 2017, the last year when the council reported data, there was sufficient land for with planning permission for 6 – 7000 homes. So, houses can continue to be built and there will be no harm in taking a little more  time, even a few years, to reconsider how many houses we really need and whether or not we need to trash our historic and beautiful countryside.”

The group has been backed by Andy Street, Mayor of the West Midlands, two Coventry MPs – Taiwo Owatemi and Zarah Sultana, MP for Rugby and Bulkington Mark Pawsey and Craig Tracey MP for North Warwickshire, in writing a letter of complaint against the Office for National Statistics for its handling of “greatly inflated” population figures and projections for Coventry.  Letters were sent to Sir David Norgrove, Chair UK Statistics Authority, and Ed Humpherson, Director General for Regulation at the Office for Statistics Regulation calling for an independent review by Sir Andrew Watson, Chair of CPRE Warwickshire, the countryside charity.

Mr Gerling has carried out in depth analysis into the ONS data and been highly endorsed by top UK statisticians, including David Coleman, Professor of Demography at Oxford University and Professor Tony Champion at Newcastle University.

The group’s joint letter states that Coventry’s projected population growth of up to 60,000 over a 20 year period “is almost three times that of the West Midlands Region as a whole, over three times that of Warwickshire, almost twice that of Birmingham and between five and six times that of the slowest growing authorities in the region. Nothing in the geography or economy of the city justifies these differences. Coventry is a traditional centre of population and employment that has experienced relatively sluggish growth in recent decades.”

Mr Gerling said: “After the last census, in 2011, Coventry was number 228th in the league table of population growth in the country – why would Coventry suddenly explode into the premier league of the top 10 fast growing cities?”

He feels “it is case of bad data leading to bad decisions” with large amounts of the historic Forest of Arden removed from green belt in-and-around Coventry and allocated to “unnecessary housing”. Last Octobers more than 150 protestors joined a Keep Our Green Belt Greet walk against plans to build 13,000 homes in Keresley.

The council is legally required to review the Local Plan every five years – but the first review is not due until December 2022, although it can be triggered earlier before March 2021. This week a council report, drawn up in response to the two petitions, recommends that councillors push the review back to 2022.  It states: “Objection to the use of ONS population projections is not considered a relevant reason to commence a plan review.”  The Cabinet is scheduled to make a decision on whether to carry out a review of the Local Plan on December 1. 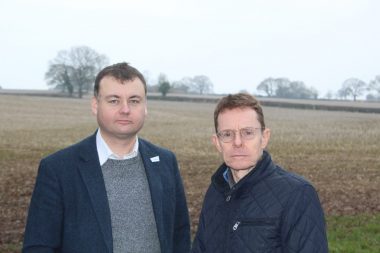 IN SEPTEMBER Andy Street and Coventry Conservative leader coun Gary Ridley launched a second online petition, calling for a comprehensive review of the Local Plan, which has been signed by nearly 2,000 residents.

Mr Street, who leads the West Midlands Combined Authority, has also written to Housing Minister Christopher Pincher to raise concerns that the Local Plan was based on flawed population projections.

He said: “The Green Belt in Coventry is being offered up to developers at an alarming rate, because the Local Plan is based on population predictions which have now been shown to be wrong.

“That’s why it is vital that the plan is reviewed urgently, not in 2022. This needs to be done now.

“If the people of Coventry have to wait two years for the review to happen, only to then see the council accept that the plan needs to be changed, they will rightly be furious – because by then even more of the Green Belt will have disappeared, needlessly.”

Campaigners have shown that Coventry’s Plan was based on predictions that the city’s population would increase massively by 2031, which are now unlikely to be accurate.

Mr Street said: “The Local Plan was drawn up using a prediction from the Office of National Statistics (ONS) which projected a population increase in Coventry of 31% by 2031, but in fact the rate has slowed massively.

“In a letter the ONS has confirmed the annual growth rate has in fact slowed to 1.3% – the lowest in ten years.

“The ONS have told me that the impact of their projections being overstated could mean 5000 homes being included in the Coventry Plan that will not be needed. Instead of providing protection against development to green spaces, the Local Plan leaving swathes of Green Belt defenceless.

“If a review has to be carried out by 2022, then it should be brought forward to now. There is too much at risk if we wait.”

Coun Ridley said: “This Local Plan is wreaking irreversible damage to the City and its open spaces. We must not wait two years for a review.

“We must review the plan now, not wait until 2022. Coventry should have a policy of building new homes on Brownfield sites first, which has been shown to work elsewhere in the West Midlands, but this plan is giving a green light to developers to target the countryside.”

We can provide all of your printing needs at competitive rates.

Search for properties in Worcestershire, Warwickshire and the West Midlands.