A STATUE designed by Coventry school pupils was unveiled by BAFTA award-winning actor and film-maker Andy Serkis on June 23.

The piece was part of a competition by the Gallery of Living History (GoLH), founded by Serkis, film producer Jonathan Cavendish and Coventry University Chancellor Margaret Casely-Hayford who worked with artistic director Jude Tyrell.

The children were tasked to come up with statue designs of subjects of untold stories in history they felt deserved more recognition.

The winning entry was from Sidney Stringer Academy School which proposed a tree of hands sculpture that promoted Peace, Equality, Unity and Acceptance. 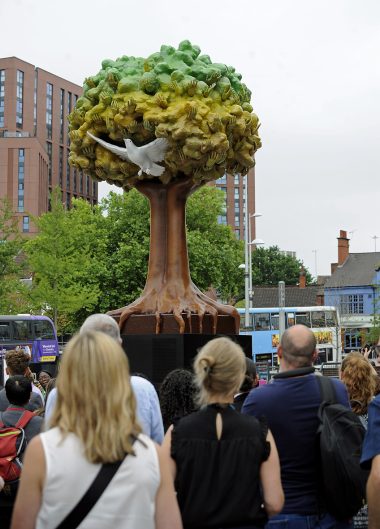 The design was brought to life by Pangolin Editions Foundry and now sits on Coventry University campus’ Starley Gardens as part of an interactive plinth and statue.

The runners-up were also from Sidney Stringer Academy school, with its concept centred around legendary lead singer of The Selecter, Pauline Black OBE.

Their work will be visualised on a screen as part of the plinth, as will a piece from Moreton School students focusing on the heroes of the NHS, which came third.

Mr Serkis, who starred in The Hobbit and two Planet of the Apes, films, said: “We are so proud of the young people who participated in this inspiring endeavour.

“We want our youth to consider the history they know and reflect on the stories that are not told and play a role in shaping how we think about the stories we tell about our past and the people who populate those histories.

“In turn, we hope this competition and the broader Gallery of Living History project sparks debate and continues the dialogue around how and why people and events are memorialised.”

Dr Casely-Hayford said: “The winning piece is incredibly powerful as were all the designs.

“It has conveyed the message of peace, unity acceptance and equality incredibly well and the final piece was amazing – I spoke to the students afterwards and they were so proud.

“There is so much talent in Coventry and these young people are incredibly sophisticated.”

Catch up on your local news by reading our e-editions on the Coventry Observer.