Coventry's Canal Basin to be transformed into swashbuckling pirate show

A BRAND new Coventry-themed swashbuckling show ‘Pirates of the Canal Basin’ will take place between April 21 and 24.

As part of the UK City of Culture year, the production will  transform Coventry’s historic canal basin into a lively pirate harbour town.

The basin will be packed full of wonderful and strange characters as well as a stranded ship.

EGO Performance Company co-produce the show with the Coventry City of Culture Trust, featuring a range of performers aged between eight and 80.

NoFit State Circus is collaborating on the project, while National Express Coventry, Arts Council England and the Canal and River Trust are also supporting the production. 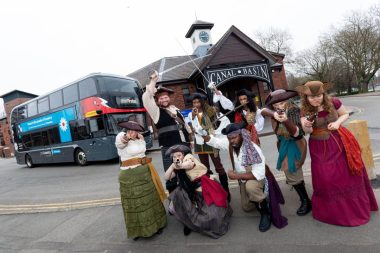 At pirate school, people will be guided by a treasure map, learning about how to become a seasoned seadog.

Visitors can also attend pirate court and drop into the pirate tavern.

The operator’s commercial director Chris Gibbens said: “We are delighted to be supporting Pirates of the Canal Basin.

“So we’re saying: Ahoy, me hearties, and all hand hoy.”

He added with a huge network of accessible services and great value tickets for families, NX Coventry’s buses were a great way for people to get to the show.

All of the shows will be available with sign language, captions and audio descriptions.

Visit https://coventry2021.theticketfactory.com/tickets/events/pirates-of-the-canal-basin/ for more and to book tickets.